Freesia — an unsung hero of the floral industry and grace defined

Our own Bill Prescott wrote this piece for the Produce News last month. We are harvesting wonderful white Freesia year-round.

Freesia is one of the unsung heroes of the floral industry. And now that I’ve mentioned it to you, you will probably start to notice it everywhere.

Have you ever heard of the Baader-Meinhof Phenomenon? According to HowStuffWorks.com the Baader-Meinhof Phenomenon —- otherwise known as frequency illusion or recency illusion -— occurs when the thing you’ve just noticed, experienced, or been told about, suddenly crops up constantly. It gives you the feeling that out of nowhere, pretty much everyone and their cousin are talking about the subject -— or that it is swiftly surrounding you. And you’re not crazy; you are totally seeing it more. Of course, that’s just because you’re noticing it more. 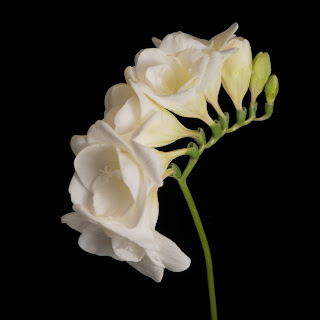 Freesias are a prime example of this phenomenon, mainly because they are in so many different styles of bouquets and designs. They usually play a supporting role, as opposed to being a focal flower. Yet they are a very strong secondary flower, often reaching out from the top of a bouquet with their elegant set of blooms. Opening sequentially, the buds can be left tall or pulled in short, such as in a classic Posey bouquet. The blooms are called “combs” because they are lined up so neatly.

White is by far the most popular color, with the obvious connections to both wedding and holiday arrangements. There is a rainbow of freesia colors in production across the globe, which creates a high amount of demand for these blooms, even though they may not get the recognition of the mighty lily, tulip or even its cousin, the iris. 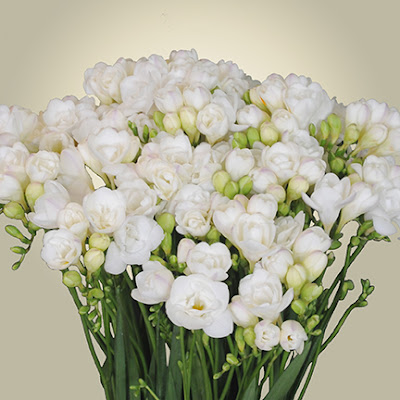 Native to South Africa where it was called “Cape Lily of the Valley,” freesia was first brought to Europe in the late 1700s. However, due to some categorizing errors at the time, freesia was misclassified as a different species and almost lost to history.

In the mid-1800s, the flower was found growing in a botanical garden near Padua, Italy. According to Wikipedia, freesia was first described as a genus in 1866 by Chr. Fr. Echlon (1795-1868) and named after German botanist and doctor Friedrich Freese who was a friend of Echlon.

In the mid-1970s, breeders started working with freesia as a cut flower, not a garden flower, and the varieties available today are all from those developments. 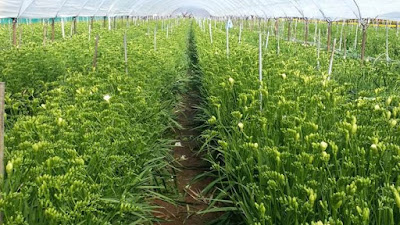 Surprisingly, freesia may actually be more valued for its scent than for its looks. It’s rumored that eastern mystics believe the fragrance of freesia has the ability to transmute imperil and the world could certainly use more of that. Today, many freesia varieties have had their scent bred out -— which is a shameful act in this author’s opinion, because the blooms naturally possess an amazing scent.

Freesia is revered by many of the world’s most famous perfume makers, being a key ingredient in fragrances such as Vanitas by Versace, Les Exclusifs de Chanel Beige by Chanel, Dior Addict Eau Fraiche by Dior, Oscar Island Flowers by Oscar de la Renta and Splash by Marc Jacobs.

You can still find scented freesia such as the white Versailles, which has a light peppery scent, being grown by Sun Valley Floral Farms in California. In the realm of colored freesia, historically, the pinks have the sweetest scent with citrusy overtones.

An amazing aspect of freesia is how much the scent varies by variety. When you purchase freesia, it is always wise to ask if the freesia has a scent, because consumers tend to love it.

Since you will start to notice graceful freesia everywhere due to the Baader-Meinhof Phenomenon, perhaps now is the time to elevate this beautiful flower to its rightful place among the roses, alstroemeria, lilies, tulips, and sunflowers.