This article appeared in a recent Produce News, written by our own Bill Prescott.

Our Ilex Program is looking great, call your sales rep. to see what varieties are available today.

Have a WONDERFUL THANKSGIVING! 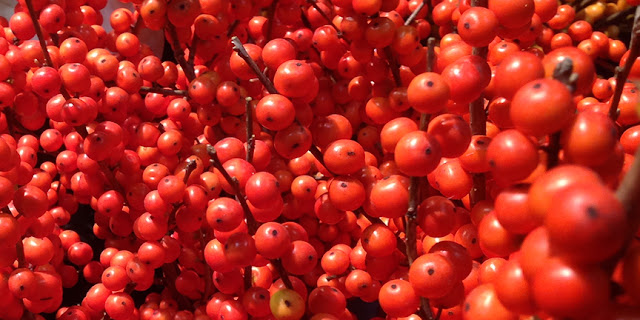 Some plants are easier to breed than others; however, it takes a long time to breed ilex verticillata — commonly called winterberry. It is with much excitement that Sun Valley announces two new varieties of ilex, which have been bred on its farm in Willow Creek, CA. The newly patented varieties are named “Autumn Spirit” and “Winter Spirit.”

Autumn Spirit is a deep rich orange and it just won a blue ribbon at the 2018 Society of American Florists’ Outstanding Varieties Competition in Palm Springs, CA. Winter Spirit is the epitome of Christmas red, with plump berries full of holiday cheer. The red berries are ready to harvest a few weeks later in the season than the orange, so they come in perfectly for the holidays.

“Innovation is a key to success in the floral industry, and by bringing a dramatically improved new ilex to market, Sun Valley continues to delight and amaze our customers,” said Lane DeVries, chief executive officer at California-based Sun Valley Floral Farms.

In 2006, DeVries started working with some Ilex test plants, which he had planted on a plot of land in a beautiful location — on the inside of a bend on the nationally designated Wild and Scenic Trinity River in Northern California. This microclimate provides a perfect spot to grow ilex, Cotinus, rose hips and other botanicals.

DeVries ranked each individual plant using a 30-point scale based on the positioning of the berries on the stem, the saturation of color, the size and number of berries, and stem length. He took cuttings from 20 of the outstanding performers and these were repropagated and replanted —this process created identical genetic copies of the strongest plants. Then he planted, tested, replanted and retested, creating ilex plants with the most desirable traits. This entire process has been repeated for over a decade.

Next, DeVries took the best selections and let the bees do their work cross-pollinating the flowers and creating unique new strains of ilex. He had the fields diagrammed like a stadium, each plant in an assigned section, row and seat so that it could be closely tracked and monitored. This systematic undertaking was — and is — a labor of love for DeVries.

Sun Valley has now gone through the extensive process of patenting two exclusive ilex varieties, Autumn Spirit and Winter Spirit, and 2018 marks their entry into the market.

“Consumers are looking for new varieties and new items in the floral department; as flower farmers, we need to be very cognizant of this and actively work to fulfill the need. Our new ilex varieties achieve this goal,” said DeVries. “These varieties out-perform existing varieties, with better yield, better berry density, and longer holding capacity of the berries.”