TODAY ONE CAN FIND ABOUT 42 SPECIES OF DAHLIA.

THE DAHLIA IS THE NATIONAL FLOWER OF MEXICO.

SYMBOLISM: Dahlias are thought to symbolize dignity and elegance, and also to express an eternal bond between two people.

FARM FRESH: Dahlias thrive in the moderate coastal climate of Sun Valley’s Oxnard, California farm in the fertile soils of our hoop houses. Dahlias are carefully harvested and meticulously packed.

HISTORY: The Dahlia flower was named after the 18th century Swedish botanist Anders Dahlia. It originated from mountainous places of Mexico and Guatemala. The tubers were grown as a food crop by the Aztecs, but this use largely died out after the Spanish Conquest.

CARE & HANDLING: Upon arrival cut stems and place into a clean container with fresh, tepid water with fresh flower food solution. Remove any foliage below the water. Keep in cool location out of direct sunlight and drafts. Replenish water as needed. 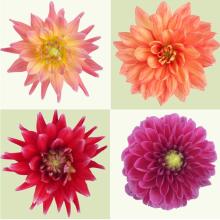