Where Does Ilex Come From?

Ilex Verticallata is the premier autumn and holiday berry in the floral world. Sun Valley’s ilex is in a class of its own since we have literally been breeding our own varieties since 2007. The season in Willow Creek, California has been phenomenal, due to the very wet spring followed by a dry, hot summer.


The ilex grows in open fields on the edge of the Wild and Scenic Trinity River. The red berries providing a superb contrast to the deep, clear pools that meaner around the property. Old Timers still call this bend in the river The Gardner Ranch, and it was first settled by Native Americans, followed by gold prospectors, then “back to the land” hippies, and now flower farmers.

Today, we grow a combination of ilex, rosehips, viburnum and grapes at The Gardner Ranch, however, the bears, salmon, eagles and ospreys seem to just indulge our efforts, as it is they who truly call this wonderful spot home.

To propagate our own varieties of ilex is very time consuming, since our selections can only be taken once a year. We bring the cuttings down the mountain to our farm in Arcata, and here they are ever so gently replanted, each thin stem, a perfect genetic reproduction, carries the traits Lane has selected onto the next generation.


Selections are based on a set of idea traits, including berry size, berry color, stem length, the angles of the lateral branch, vase life, and the density of berries on a branch.  Clones are made of the best candidates, which are then nursed to maturity. This takes about 4 to 5 seasons to produce a full harvest of berries.  (Watch this 18 second video!)


With careful planning and foresight, each year our fields yield a higher and higher quality ilex. This progression has led to the Sun Valley program getting larger each year, as well, increasing our acreage, using our next generation of selections. Ilex is a very interesting plant, in that each bush only sets berries every other year, so as farmers you must take care of two crops, yet only harvest one.

We grow four color varieties; gold, orange, flame (which is the early red crop), and traditional red. These colors cascade through autumn, with the gold and orange peaking first, followed by the flame and then the holiday red. Right now, it is prime time, as we have all four varieties available (Hint! Hint!)

And remember as Wendell Berry said, 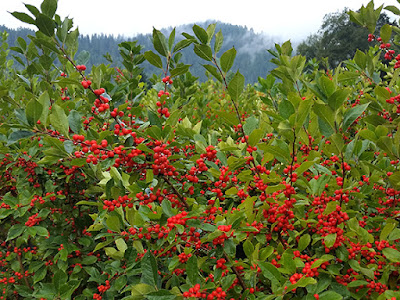