'Twas the Night Before Christmas

Twas the night before Christmas, when all through the greenhouse
Not a creature stirring, not even a field mouse.
The stems were counted by the bucket with care,
In hopes that FedEx soon would be there. 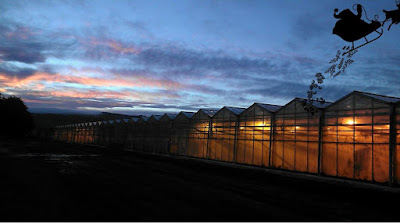 The flowers were nestled all snug in their sleeves,
While visions of vases ruffled their leaves.
Tulips in their crates, and iris in the ground
Had just settled their bulbs for a nice winters' round.
When out on the roof there arose such a clatter,
I raised my petal to see what was the matter,
Up to the ceiling I directed my eye
rubbed the pollen from my petals and looked to the sky
The moon on the glass with the new fallen rain
gave the luster of magic to each greenhouse pane
when, what to my eye should appear at this hour
but a miniature sleigh and eight gorgeous flowers.
With a little old driver, so lively and quick,
I knew in a moment it must be St. Nick
Better than silk, his fresh flowers so tall,
he whistled and shouted and gave them a call:
"Now Tulip! Now Lily!
Now Rosehip and Ilex!
On, Freesia! On, Calla!
On, Lizzy and Iris!
To the top of the greenhouse!
To the top of the wall!
Now bloom away! Bloom away!
Bloom away all!"
As  leaves that before the wild hurricane fly
when they meet with an obstacle, mount to the sky
so up to the house-top the coursers they flew
with the sleigh full of flowers, and St. Nicholas too.
And then in a twinkling, I heard a great hub,
the opening and blooming of each flower bud.
As I drew in my head and looked to the side
down the drainpipe came St Nicholas inside
He was dressed in all pine, from his head to his knees
and his clothes were all tarnished with soil and greens
A bundle of lilies he had flung on his back
and he looked like a florist just opening his pack 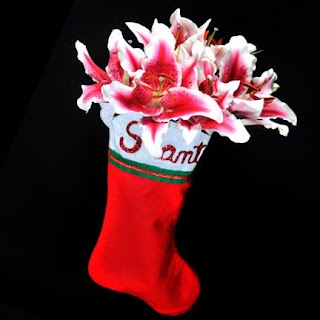 His tulips- how they shone! his ilex, how pretty!
His freesia were fragrant, his ilex so merry!
His pretty bouquet was tied with a vine,
and the blooms of his lily were red like wine;
The stem of a calla he held in his teeth,
and around his head was a hydrangea wreath;
He held stargazers in one of his hands
and gave a big smile, showing his plan,
He was strong and devoted, a true flower farmer,
And I smiled when I saw this faithful plant charmer,
A wink of his eye and a twist of his head
Soon let me to know I had nothing to dread;
He spoke not a word, but went straight to his work,
planting some seeds; then turned with a jerk,
And laying his finger aside of his nose,
And giving a nod, up the drainpipe he rose;
He sprang to his sleigh, to his team gave a whistle,
And away they all flew like the down of a thistle.
But I heard him exclaim, as he drove off with power--
"Happy Christmas to all, and may all have Fresh Flowers!" 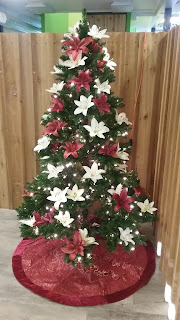