Mother’s Day is the ultimate day to celebrate with gorgeous, dramatic Oriental lilies. Sun Valley is renown as the birthplace of the legendary Stargazer Lily in 1974, by Dr. Leslie Woodriff. This is the most popular lily of all time and holds a prominent place of honor in floricultural history. 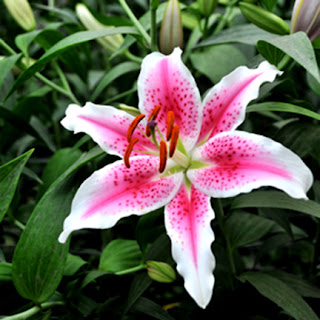 Early on a recent morning, I posed the question to Lane DeVries, “What came before Stargazer?”

This question led to a brief history lesson on Oriental Lilies. 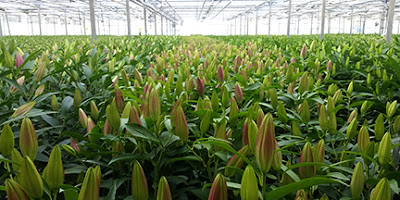 The pre-runner to Stargazer and most other lilies currently identified as Orientals is Rubrum (L. speciosum var. Rubrum).  This was the stock Dr. Woodriff was working with when Stargazer was created.

Rubrum has a very interesting history itself, according to the Ofuna Botanical Garden in Japan:

In the early part of the 20th Century, Rubrum lilies were so prolific in Japan, they grew wild throughout the country. 1925 to 1935 highlighted this golden age for the Japanese lily enthusiasts.

Hirotaka Uchida was one of Japan's most proficient farmers of that time. A large exporter of lily bulbs, Hirotaka's personal pursuit involved the cultivation of exceptional Rubrum lilies. From his fields, he selected out lilies bearing the most beautiful flowers that also showed the greatest resistance to disease. These were transplanted to a special field where he and his eldest son, Machao, watched over them.

When World War II began, many orchards were turned in to potato fields. Although flower fields were politically "discouraged", Hirotaka and Masao had such an affection for the special clones they had been cultivating, that while other flowers disappeared from cultivation, their lily efforts continued. They chose 13 of their finest clones, and as they cared for the superior lilies, little by little, their quantities increased.

After the war, the longed for export of lily bulbs finally resumed. In 1949, the Uchidas exported the first 60 bulbs of their crowning achievement: a lightly-fragrant, beautiful rose-crimson, spotted Rubrum which had shown exceptional hardiness.

These bulbs made their way to the United States, and were traded and bred with additional species by lily enthusiast.

Dr. Woodriff was an eclectic soul, who bred lilies with an unparalleled passion. He literally mixed the pollen from many species of lilies to create Stargazer from Rubrum.  No one actually knows what additional lily genetics led to the break through lily which bloomed facing towards the sky, hence the name, “Stargazer.”

Ironically in an article from 1987, Dr. Woodriff recounts a story of an Oregon State University professor telling him that any lily other than conventional white wouldn’t sell because white is considered the symbol of purity, to which Dr. Woodriff replied,

“We figure on selling these colored ones to people that aren’t quite pure.” 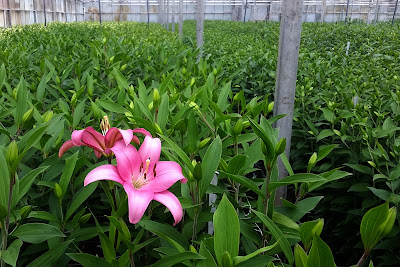 Leslie Woodriff was the rogue of the flower world, and continued to breed award winning lilies and begonias until his death in 1997, developing other famous varieties such as Black Beauty.

The legacy of Dr. Woodriff is alive and well at Sun Valley, just a few miles from where the Stargazer was born. A few years back, a friend dropped off some of his breeding equipment and books at the farm for safe keeping.

Was this the brush used to gather the pollen that created Stargazer? It is a distinct possibility.

Our crop of oriental lilies is looking beautiful for Mother’s Day, Dr. Woodriff would be proud.