Can you feel it? Halloween has passed, election season is reaching its apex, and pumpkin spice is everywhere—Fall is here in all its glory and you don't even need a calendar to know.  The same goes if you're a flower farmer...the flowers tell you.


Take ilex verticillata for example... our ilex season kicks off in early October with gold and orange berries which echo the changing seasons perfectly.  November brings an overlap of all the colors—gold, orange, and the brilliant red-orange variety, flame. November is also when we start offering our famous, cherry-red ilex, which we continue harvesting through December.

We grow ilex at our  Willow Creek Farm, located 40 miles inland from coastal Arcata in Northern California.  This canyon in the hills provides the perfect micro-climate for ilex—a long, extended autumn, mild weather, and rich soil.  These elements come together to help us produce our high-quality ilex, renowned for its long stems and large berries.


Mature ilex plants produce berried stems every other year, which means they are a long-game crop that requires devotion.  And for the last three decades, devotion is exactly what they have been receiving from Lane.   Soil-grown tulips aside, ilex is one of Lane's favorite crops and growing and breeding them has become quite the labor of love.

As mentioned above, ilex is not a short-term project—over the last 30 years, as Lane found desirable characteristics in individual plants (such as strong stems, great laterals, and good berry density), he marks that particular plant, and later, cross-breeds them with others in order to produce the best of the best.  Lane has created some of the finest ilex in the industry this way—ilex that you cannot find anywhere else.


The leaves on ilex will naturally drop off as the season progresses; however, when demand is up, we employ a few natural tricks to get ilex to drop their leaves.  Ilex berries are a fruit, and like most fruits, they emit ethylene gas.  By covering up a cart of freshly picked branches with plastic and leaving it overnight, ethylene gas becomes trapped and causes the leaves to drop off, leaving us with clean, berried stems.  Once ilex has shed its leaves, it remains a sturdy, dependable product that can last the entire season. 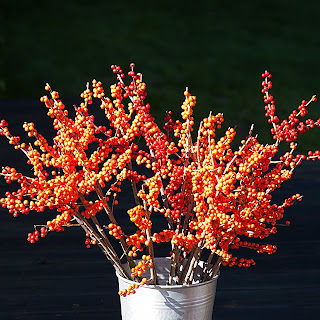 Ilex branches add incredible lines, depth, and height, and their berries provide a powerful focal punch. The sky is the limit when designing with ilex.  Gold, orange, and flame-hued ilex make great additions to autumn arrangements, wreaths, and bouquets...and of course, there's nothing prettier than a vase full of ilex berries by themselves. Just check out the versatile and gorgeous combinations below:

We sell cut ilex with stem lengths ranging from 16-32 inches, and also offer mixed color boxes, allowing our customers to choose what best fits their purposes.  Order now to get our range of autumn ilex, grown with love, and exclusively bred to be the best of the best.