The Flowers of the Dead

El Día de los Muertos (or Day of the Dead) is a national holiday in Mexico, celebrated on the 1st and 2nd of November.  This commemorative holiday honors those who have died with beautifully colorful decorations of flowers, candles, altars, and more.

One year, I was able to experience Día de los Muertos in its place of origin.  I walked into the Panteón de Dolores (the largest cemetery in Mexico) and was blown away by the eerie beauty.  The cemetery had become a gorgeous, candlelit party ground, full of people singing, dancing, crying, and laughing--all emotions were represented; families shared food around their loved one's graves, mariachis played crowd favorites, and the air was filled with an energy of celebration.
El Día de los Muertos is thousands of years old and has its roots in the pre-Hispanic ceremonies of indigenous Mexicans, most notably the Aztecs.  To them, death defined and illuminated life; they complement each other and just as death comes from life, so life comes from death.  This ancient custom of honoring of the dead has become a lasting tradition in Mexico, and is also celebrated in the U.S. as well as across the world.

In addition to celebrations in cemeteries, another big element of Día de Muertos is the construction and decoration of ofrendas, or altars.  Many people construct ritual altars in their homes and communities which are intended to welcome returning souls back to the land of the living for the day.  These altars are warm and welcoming, typically adorned with Zempasuchitl (marigolds), and covered with candles, photos, calaveras (sugar skulls), and the deceased's favorite foods.

The Flowers of the Dead

Oftentimes, Día de los Muertos is compared to Halloween, due to its proximity of date as well as the shared elements of decorating with images of skeletons, paying tribute to spirits, and celebrating death and the afterlife.  However, el Día de los Muertos is more of a celebration where friends and family gather to pray and remember those who have died, giving it more of a commemorative feel than Halloween.

It's this very spirit of commemoration which has made fresh cut flowers compulsory in the multitude of Día de Muertos decorations and ofrendas.  Zempasuchitl, aka marigolds, are the traditional flower of the dead and are the most-used flowers during this holiday.
﻿﻿ 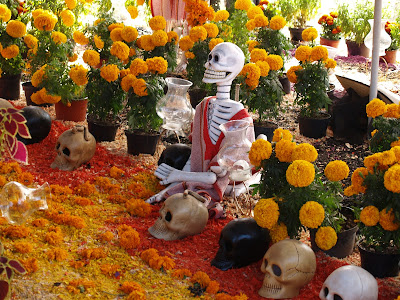 To the Aztecs, the marigold was a sacred flower used in religious ceremonies and funerary rituals, which makes sense why they would continue to be used in all elements of Día de los Muertos. Elaborate arches, crosses, and garlands are created with the orange and yellow flowers and set upon altars and gravestones.

It is believed that marigold's bright colors and attractive scent guide dead souls back to their familial altars. In some communities, people build a path of marigolds from their homes to their loved one's tombstone, in order that the deceased may easily find their way back home again.

If you want to celebrate Day of the Dead this year, try creating a small ofrenda of your own, adorning it with flowers, photos, candles, or any other memorabilia you like.  Or, if prefer a simpler decorative commemoration, fill a few vases with marigold bouquets, and let the bright colors and lovely scent remind you that Día de los Muertos is, indeed, a celebration.