Last week at the International Floriculture Exposition in Miami, our own Lane DeVries was surprised with a very special ceremony. A new variety of tulip, bred in Holland, was named in his honor. 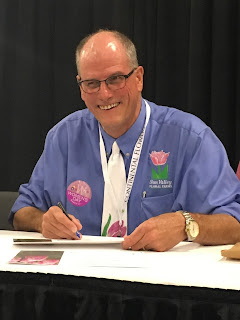 The name of the beautiful pink tulip is "Dutch Lane" and it was selected because it is the perfect tulip for Women's Day. Lane was the first person to bring Women's Day to the floral consciousness as a sales opportunity over ten years ago.

The tulip is a crossbreed of Prominence X Ballerina and X Tres Chic from Vertuco BV.

Here are a couple images of the presentation, thank you to E. Shaunn Alderman of Floral Business for the great photos.