Chinese New Year is a centuries-old holiday, dating back to when some of the first agrarian societies  celebrated the cycle of seasons, which is why it is also known as the Spring Festival or Lunar New Year.  This year, January 28th will mark the beginning of the Year of the Rooster. 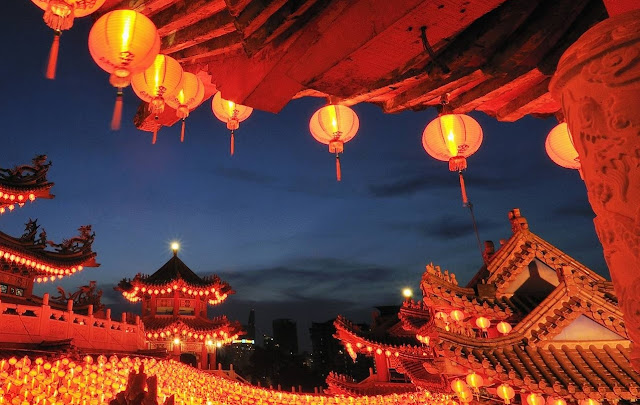 There are several legends about the beginning of the Chinese New Year, and they all include a beast called the Nian (which translates to "year").

The Nian lived in the mountains, and towards the end of winter, (when it was particularly hungry) it would come into the villages to devour livestock, crops, and children. The villagers were helpless to stop the Nian until they discovered that the monster feared loud noises, fire, and the color red.

So the next winter, they lit firecrackers and decorated their homes with red lanterns, flowers, and scrolls.  The Nian never came to their village again, and the anniversary of "the passing of the Nian" is celebrated, without fail, every lunar new year.

As a child, my Popo (grandmother) would always pay us a visit during Chinese New Year, and she would bring lilies for my mother, and for me, a red envelope (known as lai see) with a few dollars inside. Now, as an adult, we have continued the tradition in our own way: my mother sends me lai see, and I send her flowers.

Flower and fruits hold a special significance during Chinese New Year.  Flowers symbolize rebirth and the upcoming spring, and fruit blossoms (such as plum and peach) symbolize the beginning of the growing cycle which will bring fruit later on in the year. Mandarin oranges indicate fortune and bamboo means luck.   Showcasing both flowers and fruit in the home during Chinese New Year is believed to bring good fortune to the household for the coming year.
Some of the traditional flower choices for Chinese New Year include red chrysanthemums which signify longevity, lilies to help one forget his or her troubles, and golden sunflowers for good fortune in the new year. Traditional or otherwise, there is a plethora of red and gold flowers to choose from when celebrating Chinese New Year.  And, if you want to highlight any Year of the Rooster birthdays throughout the year, think of the unique celosia (photo below, top right).  Its interesting texture and form makes a great "Rooster" flower.

Regardless whether or not you celebrate Chinese New Year, I think we can all enjoy "the passing of the Nian." May your year be filled with flowers and good fortune.